This is the ultimate summer comfort dessert and, believe it or not, it’s really quite quick and easy. Indulge by eating with your hands outside; it doesn’t get much better than that.

Combine the sugar and cinnamon in a mixing bowl and set aside.

For the chocolate sauce, place all the ingredients in a saucepan over a medium heat. Gently melt, stirring occasionally, until it becomes a smooth, shiny sauce. Keep warm on a low heat.

To make the churros, in a small saucepan over a medium heat, combine the water, sugar, salt and 50ml vegetable oil. Bring to the boil and remove from the heat.

Stir in the flour until the mixture forms a ball. Then add the eggs, one at a time, beating in quickly and vigorously. Transfer the dough mixture into a piping bag with a wide nozzle.

Heat the oil for frying in a thermostatic fryer, or a fill a deep saucepan two-thirds with oil and heat to 190°C. Pipe a small amount of the mixture into the oil to test the temperature. Once the oil has reached the correct temperature, pipe strips of dough directly into the hot oil, in small batches. Fry until golden, then drain on paper towel.

Roll the drained churros in the cinnamon-sugar and serve with the chocolate sauce on the side.

Tjaart Walraven is the exciting, fresh new face on the celebrity chef circuit, best known as a presenter on three seasons of the top rated “The Great South African Bake-off” on BBC Lifestyle. His deliciously fresh recipes are simple to follow and great for weekday family meals as well as for serving to a crowd. 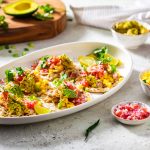 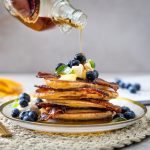